An endless barrage of hyped up CGI

Just watched a rerun of Hollywood blockbuster The Day the Earth Stood Still, which fortunately, I managed to convince myself was in the name of research. True to a review I read, it featured Keanu Reeves yet again being paid millions to impersonate a floorboard. The theme of this particular film was centred around Aliens coming to Earth to destroy human civilisation because in their eyes humanity is a danger to other extraterrestrial civilisations, and featured scenes of mass destruction on an epic scale. It was another of what seems to be an endless barrage of hyped up CGI enriched armageddon/O-no- it’s-the-end-of-the-world dramas where life on earth almost ends or civilisation collapses due to asteroids, zombies, aliens, viruses, mutants, robots, bad ecological management or all of the above - in no particular order.

Not sure what I mean? Let me refresh your memory:

That’s a lot of apocalypse - and this list is by no means comprehensive. Nothing like this scale of realistic imagery and scope of destruction has been portrayed ever before in history, so consistently, with armies of CGI artist doing their best to make it look as convincing as possible. I believe it’s correct to say this almost overwhelming stream of apocalyptic content would be completely inconceivable even 50 years ago. The extent to which devastating global disaster is automatically built into the background of many modern stories is insidious. It’s almost as if the future of history has already been signed off via Hollywood and the games industries.

A generation of hopelessness

Maybe all this mass mayhem is just some good old fashioned healthy fear? It makes sense that with this new and developing global consciousness of ours, come sensible fears. Definitely some modern media is actually educational and provides a realistic portrayal of potential scenarios. But how much fear do we need? We have an entire generation of kids rabidly consuming this stuff, constantly envisioning the end of the world in stunning CGI. We don’t provide a ground of hope and sustainability to young people as the context in which all this can be digested. Quite the opposite.

We all seem to be gripped by the fear of rapid climate change and live with the background fear of nuclear war looming there out of sight, subliminally sickening us with feelings of a hopeless future. I grew up in the 1980’s when the possibility of nuclear armageddon was deemed to be a very real possibility. There was a sense of hopelessness that just shouldn’t be dumped on young people. It’s not fair, it’s not actually true to the situation and can’t be helpful terms of developing fundamentally healthy outlooks on life in the 21st century and beyond.

In his book The Promise Ahead, speaker and author Duane Elgin proposes a thought experiment - What if the human race was an individual human being? He asks his audiences, “If we think of the entire human species as being just one individual person, how old would you say we are? Are we a child? Are we pre-adolescent? Are we adults? Are we in old age?” In a fascinating experiment in collective wisdom, after asking many of his audiences around the world for several years, it seems the audience’s verdict is that we, as a global culture, are in adolescence. Looking at our collective emerging consciousness from this point of view - surely a good measure of hope and visions of a bright and wonderful future is called for in the growth of any happy young adult! The pervasiveness of a modern apocalyptic end to culture in modern media is a sign of widespread malaise in our burgeoning global consciousness. And growing up with a sense of futility about one’s future can only create nihilistic adults. This is something we need to fix.

I wouldn’t mind if there was some substantial counterweight in terms of visions of the future. I mean, clear widespread actual visions of a sustainable, radically successful future? Having read the previous list, try and think of some positive apocalypse-free portrayals of the future of humanity in modern cinema or computer games. Anything spring to mind? Media portrayals of quiet, happy, sane, sustainable, developing, ecologically oriented, humane futures seem to be few and far between. Apparently they’re just not bankable.[Note 1]

Visions of the future

It seems these endless depictions of mass mayhem foster a conviction that we are headed for a self-induced mass cataclysm. It’s a symptom of what seems to be an extreme lack of faith in humanity’s capacity and potential to innovate a beautiful future. To me it’s all the more painful knowing that a sustainable and extraordinary human future is technically, socially, economically and ecologically viable, starting right now.

What visions do we hold of the human future? What is our goal as a global culture, as a self aware civilisation? I don’t believe we really think about it. We collectively don’t think about humanity 500 years from now, let alone 1000, or 5,000 years from now, because we still haven’t worked out why we should. And anywho, our (probably subconscious) reasoning goes, it doesn’t apply to us cause we’ll all be dead. We are notoriously short term in our thinking. That doesn’t mean there’s anything wrong with us - I mean, I can’t think of any other long range planners in our mammalian ancestry - but we do need to grow out of it. We have only, en masse, just started to really plan for our future 100 years from now for what seems to be the first time ever, because we have to, in response to climate change. It’s encouraging but just a knee-jerk response oriented to survival. Not a consciously initiated endeavour to seeking and developing the meaning of human life on Earth.

I believe a way forward here, and an antidote to all this doom and gloom, is to envisage radical success in relationship to all our current challenges. It’s quite an exercise and I highly recommend you try it. All current visions of mass failure only reinforce the pervading cynicism that we are not valid as a species. If we simply reverse that approach - by envisioning our radical success - our attention is directed to how beautiful and extraordinary we can be. In my opinion, any good upstanding viable vision of our own radical success requires the following viewpoints be firmly in the picture:

One of the objectives of the One Future brand is to begin envisioning what such a future might comprise of and how it can be possible for us. The values of a cultural movement for a sustainable and ecological future are values that go beyond the issues of mere survival. Those values are about the essential role and meaning of humanity’s self-reflective and evolving culture in the biosphere, the solar system and the cosmos.

Whilst I’m on the topic - regular pronouncements of doom from the wheelchair of Stephen Hawking really aren’t helping. That includes his daft idea that to survive, we must leave the Earth and start space colonies. If we can’t create a sustainable culture here - why try it somewhere almost definitely worse? Go to reference in main text 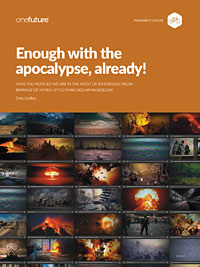