Galileo’s Error: Foundations for a New Science of Consciousness
by Philip Goff

In his new book, Philip Goff champions the burgeoning field of Panpsychism as a new way of thinking about the nature of matter and existence itself. The extraordinary view of Panpsychism is that matter itself is essentially consciousness—matter are one and the same.

Goff describes a re-emerging philosophy of Panpsychism based upon a reviving of the fascinating propositions of Arthur Eddington (famous early exponent of Einstein’s work) and Bertrand Russell the English philosopher. Between them they pointed out that the physical sciences don’t actually explain what matter is. Eddington and Russell pointed out there is a gaping hole in our understanding of matter. The physical sciences explain what matter does, but not what it is. It’s a stunning insight. From these positions, it seems the emperor wears no clothes: materialism doesn’t actually explain what matter is. It’s from this position that Russell and Eddington proposed their arguments for consciousness as the intrinsic nature of matter. Eddington and Russell’s approach is a great example of something Goff champions throughout Galileo’s Error—the power of sitting in an armchair and just thinking clearly about things—as a powerful tool in both science and philosophy.

Galileo’s Error is an argument for the re-insertion and consideration of consciousness as a fundamental aspect of all existence. Goff’s introductory arguments for consciousness are simple and compelling. He points out: “All knowledge of reality is mediated through consciousness.” therefore, “Nothing is more certain than consciousness.”. He also says: “Science has a dismal track record of explaining consciousness” and “Science could no more prove that consciousness does not exist than astronomy can prove that there are no telescopes”.

The title of the book pinpoints what Goff sees as the erroneous foundations reductionism. Galileo’s Natural Philosophy created the paradigm in science of reductionism or materialism, based on his belief that all things could be described via mathematics. Galileo’s error, Goff says, was to exclude the sensory experience of qualities from his mathematical philosophy. This mis-calibration of science that has left the fact of consciousness outside the the realms of empiricism for the last 400 years.

The book delves into the three main methods attempting to explain the mystery of consciousness: Dualism, Materialism and Panpsychism. Whilst Goff is a champion and philosopher of the latter, his approach isn’t prejudiced—the first major sections of the book take us on an intellectual adventure as Dualism and Materialism try and explain the mystery of consciousness. In the process Goff educates us in the limitations of these approaches and by the time Panpsychism is introduced it’s clearer why it’s a compelling argument.

Autobiographical elements in the book paint a picture of the author’s personal passion for philosophy and personal struggles with Dualism and Materialism. Goff describes himself as initially a staunch Materialist, then a “closet Dualist” before giving up on philosophy altogether, and then later discovering Panpsychism. It’s what makes Goff a worthy voice of dissent of current paradigms—he has swum in the deep end with the arguments from all sides. Whilst he’s clear on why he doesn’t overly support them, he gives airtime to a large array of disparate perspectives on consciousness. Including the later discussion of panpsychism, this broad and dynamic coverage makes for an interesting and educational read.

Science could no more prove that consciousness does not exist than astronomy can prove that there are no telescopes.

In other autobiographical elements painting a picture of an active and engaged philosopher, Goff describes a close encounter with the infamous reductionist/materialist Dan Dennet. In combination with the excellent philosophical challenge of Black and White Mary, Dennet’s staunch resistance to it’s powerful and pretty clear arguments provides us a glimpse of the Materialism paradigm and it’s almost complete denial of the phenomenon consciousness as anything but a side effect of material constructs. The problems of the Materialist paradigm are further emphasised by the founding concepts of Panpsychism, mentioned earlier.

In regards to Panpsychism itself, Goff describes a flourishing field of investigation with different types of approach to Panpsychism. Also described are the unusual ways Panpsychism is being taken up as a working explanation of consciousness even by staunch materialists. He also covers the new problems that always come with any new field, such as the combination problem: If matter is indeed consciousness, how does it become the consciousness of sophisticated brains like ours? That is, how does it combine? New developments in the thinking of emergentist panpsychists in the field of Integrated Information Theory (IIT) have exciting new approaches to this.

This is a fascinating view into an exciting new field of thinking that may have huge implications on how we think about our universe. The last chapter of the book Goff discusses the potential of Panpsychism to to transform thinking and values in the fields of environmentalism, spirituality and the philosophy and science of free will. It seems to me that the insights presented in Galileo’s Error have the hallmark of a new post-materialistic paradigm for science that’s long overdue. 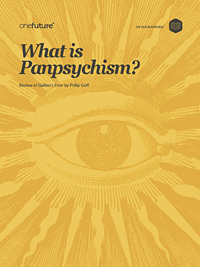